to me as a white feminist, I need to make room as well

She speaks candidly to bissfest about what fuels her passion for change and how the women in her life have propelled and taught her about the importance of community and responsibility. Werner calls the work she does activism with a purpose. Freedom and equality for all is that purpose for her. Carolin Joy is a true fashionable Berliner. She is brave and unafraid of mixing razor-sharp colors into her every-day palette of white, grey, black and blue. On the day we met, she was color-blocking in an almost yellow neon v-neck sweater and a tailored black ankle-length trouser.

Her lips were drawn and highlighted with a bold red. Her face was framed by a shoulder-length bob that danced on her shoulder tips just a bit.

A 3D-pocodot sock in vibrant rainbow colors, completed her look. She thinks of herself as „color-brave“. She doesn’t just dress for the sake of it. She dresses to enhance her personality.

„My personality is maybe the darker colors and then the funny sock adds some levity because I don’t mind talking, I don’t mind engaging people,“ she says.

She also mentions that she likes to try new things because she is trying to live „more true“ to herself. What she thinks is the purpose of her life is „to make use of the freedom I have in other to make sure that as many people as possible can have freedom as well. To respect, to love.“

Carolin Joy is immensely smart, reflective and informed. She does not shy away from giving credit where it is due. What inspires her „is mostly people who are brave enough to live their truth.“ Her mother is one of those people. She loves her mother for several different reasons but one of them is

„My mum decided to stay at home and raise us kids and put a high investment of her life or her life’s time into family and that’s her truth.“

She believes that truth can be tangible in the sense of the interpretation of something, and that truth can change because it’s all a question of perspective. Her truth is one that she questions by questioning her privileges.

„I am well aware as a white woman although as a woman I lack certain privileges. But as a white person, I do have many.“

That to her is the knowledge that shapes her point of view and then her truth. This very knowledge also informs her path and what she has decided to dedicate her life to. 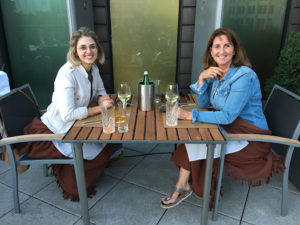 Her truth and how she sees herself and the responsibility she has as a woman in the world are things she picked up watching her mother. Watching her mother, she learned that „it’s worth it to invest in individuals“. She calls her mother her „lifeline“ because;

„She grounds me when I go into a spiral of doubt and fear. She is the one who sits me down and tells me what I am capable of and that echoes in all my female friendships.“ She confesses, that „I do have my faith but women are a significant foundation in my life.“

The women she keeps around herself mean a lot to her.

She feels the essence of feminism when she is around women. 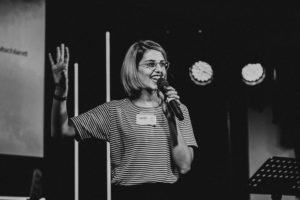 Carolin is „wholeheartedly“ a feminist. A feminist who has seen changes in her path towards a better understanding of what the term means. She confesses that ten years ago, she was at a different place in her life and certainly not definitive as she is today when it comes to feminism. She told us that she wasn’t raised in a feminist mindset. She was raised in the church. A place where women were not and are still not allowed to preach and assume leadership positions, in certain places in the world. Even though her parents were progressively accommodating and supportive of her potentials and dreams, she was aware of the fact that there were things she will not be allowed to do because she is a woman.

A change of perspective only came after she started to look into what she could do, what she could achieve, then looking around at her female friends and seeing what they are all capable of. That was her a-ha moment, a moment of realization which changed everything and gave her a new perspective.

She takes her work very seriously.

„I have a responsibility … and the freedom that so many women fought for that I can have now, they give me a responsibility to step up and to use my voice and literally voice my concerns about discriminating structures,“ she says.

To her, „women who are feminists are not just there to push back on men.“ She fiercely believes that „feminism is about equality.“ For feminism to work, she „expects from men to move aside and to give us (women) room.“ She also lays this expectation on herself, saying „as a white feminist, I need to make room as well.“ Giving room to other voices means creating a safe space for others to find their voices. She assures women whose voices are stifled that since she has

„the freedom to speak on this and a voice that is likely to be heard“,

she will use it in the fight for equality. She is aware that the term feminism comes with a history of exclusion especially of the exclusion of women on the fringes of life. So when asked about what other words that encapsulate the meaning of feminism to her, she said, „equality“.

With equality, she means „equality in all senses, equality in gender, in race, in class, people who live in poverty who are mostly female.“

She also shares that when she looks at a percentage of females who are victims of slavery or females who are being victimized, that to her is too. A fight to end modern-day slavery is a fight for feminism and equality, because

„modern-day slavery is not only a class question, it is also the question of equality.“

This work is very close to her heart. She doesn’t take it lightly. She feels the weight of the responsibility on her shoulders. She points out that

„it is very hard for me to think that I can be feminist fighting for equal rights in Germany but forget about women in Kenya, in Cambodia.“

She discloses how Important the #MeToo movement is to her and why it should be important to everyone.

Carolin told us some of the things her work is involved with. We learn that what IJM does is, it empowers law enforcement, justice systems in countries like Ghana, Kenya, Cambodia, Thailand, to pursue cases where human trafficking is involved. IJM works with law enforcement and other organizations to empower and support rescue operations. Their work also involves lawyers, who process and prosecute the perpetrators of modern slavery and human trafficking. IJM also teaches how to deal with the effects of trauma on survivors of trafficking by creating an after-care program to ensure a safe and healthy transition back into daily life after rescue. Carolin told us how much a person is worth in the
context of modern slavery, a mere 90 dollars.

She told us that modern slavery and human trafficking are billion-dollar businesses that generate annual profits of 150 billion dollars.
Despite all the difficulties involved in her work, she notes that they are starting to see changes.

„We see that already in the casework that we do in the Philippines. It had a decline of almost 80% in the area where we worked because of the danger and the high risk.“

As we wind down, the once Art History student reminisces about her love for music and art history. She plays piano, she sings but she has shifted far away from that now.

„I shifted because I felt the sense and the urgency of the responsibility I have as a person in freedom.“