It is late January in Berlin, and she is being ushered into the bissfest office by our cinematographer, Tiago.

Miss Vetter has at least four decades of artistic experience under her belt, dancing her way through several prestigious dance companies and schools like the very esteem Juilliard school of performance in New York, the Maria Olenewa School of dance Rio de Janeiro, the Royal Academy of London and the Dalal Achar Academy respectively long before ballet became mainstream. Her fate was sealed at sixteen after her solo performance of Marius Petipa’s Paquita.

Miss Vetter is sharp-shouldered in a formal suit and a white shirt. She is flame- haired and spotting an ear-length bob. She seems stoic and measured however, occasionally, she smiles and lightens up the room. Her black suit is blending into the shadowed background seamlessly but she is ever so present in such a way that her essence shines through. She looks armored-up and ready to go as she sits face forward confidently on a purple sofa. She sits leaning forward— intentionally slouching just a bit towards the camera and the interviewer, as she begins to open up about her past, her present and what she has learned over the years.

She is a true manifestation of how handwork, dedication and a dream can alter a person’s life for the better if they believed hard enough and worked at it. Her parents even though reluctant allowed her to forge her path.

Instead of questioning and convincing her otherwise, they embraced and opened up to the prospect of a dream on stage. They watched it flourish and blossom into a full-blown career.

Her mother whom she calls „diligent“, cared and showed an understanding to her questions as an Artist. Miss Vetter says that her mother was no stranger to her artistic quirks. They had been great friends long before she set out to dance. Their friendship grew stronger and it developed as she matured. Even as a child, her mother was aware of the fact that as an artist, she exhibited the curiosity of someone who walked towards a rather artistically alternative path with an interest in culture and profession. 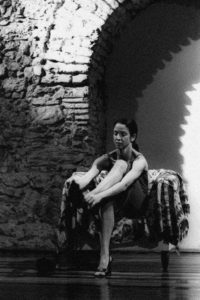 the devotion, the unconditional love, the continuous generosity, the uncompromising support and encouragement her mother was able to muster up in support of her pursuits. This support „helped me to seek knowledge so that I could help myself“ in moving forward.

Her journey began long before her solo performance of Marius Petipa’s Paquita. She danced, performed and even earned money for her performances at a very young age.

Being paid her first wage at fifteen made the dream of earning a living dancing a reality she couldn’t resist.

„dancers now had an opportunity to get professional training and by so doing become permanent members of a dance company.“

She swears she knows she was privilege enough to have grown up with the knowledge that she knew she wanted to be a dancer at a very early age. „I was three years old,” she says. She didn’t actively seek passion.
Somehow, passion just never left. As she matured, she made a decision that she wanted to have a professional education while assuring herself that if by some misfortune she could no longer follow her passion as a dancer, she would still have a profession to fall back on. „It was Law for me“, she says.

After all these years, miss Vetter still leads a very disciplined and active life.
She hasn’t departed from dance completely just yet. Her dalliance with the art form is still alive and kicking. Neither has she forgotten some of the most valuable lessons she learned while dancing. Discipline is one of them.

Miss Vetter discloses that dancing professionally „requires and teaches a great deal of discipline.“ To her, it also teaches focus, dedication and how to build what she describes as „a dynamic concentration.“ A concentration she would later use in navigating a more strict and perhaps non-performative profession, law.

„Dance is what got me into law actually,“

she says that it is that same discipline she learned through dancing which she was able to apply to law. She states that her passion for dance was born furtively while the other (her love for the Law) developed over time.

She told us that she feels „privileged to be considered an artist in today’s world“. She admires contemporary artists and colleagues whose works are centered on theatre and contemporary dance because she sees the dedication, the passion and the time they invest in the geo-cultural developments of the countries they reside in. And how through their work they seek a greater purpose. A purpose, bigger than themselves as they attempt to become responsible and useful members of their respective societies. She believes that performance art is

„truly really about being continuously aware that people are constantly being politicized and used to drive political narratives.“

Therefore she believes, that the artist should try to gain a deeper and specialized understanding of the times while practicing independence in their artistic work whether through choreography, film, interview or lecture.

She does not find the objectification of things and moments particularly interesting. She views her life in a more pragmatic sense. She discloses that she has always tried to put everything she has learned to practice. She has learned to pull herself back up, to trust and to stay open to new things.

She has no deep desire to dwell in the past even though she on occasion allows herself to travel down memory’s lane. On those rare occasions, she ruminates about her dearly departed parents, her husband, the home in Brazil she now lives so far away from, all of whom she misses intensely. 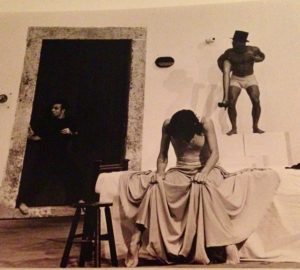 The artist to whom Germany is now home instinctively understands that there are several different ways through which she feels at home.

„In some very peculiar way, I feel tethered to Germany, especially to Berlin. Deep down, I have always felt it somehow“, she says.

Her connection to Germany and Berlin is one that raises questions not only to others but to herself as well. She wonders about it occasionally, especially at those moments when her nationality is questioned and or during those instances where she is labeled a foreigner.

In those moments, she says „I am quickly brought back to the consciousness, that I am a foreigner and therefore I must be somehow different.“

Being different is not an entirely new concept to Vetter. She doesn’t shy away from it. She takes it head-on. She uses questions of her own difference to challenge herself to be more introspective.

„I then quiz myself on how and why anyone would label me a foreigner when Germany feels so much like home when the German culture feels so comfortable to me?“

In loving Germany, she hasn’t forgotten her home or about the uncomplicated beauty of her people.

„If I could, I would bring the spirit of hard-working Brazilian folks“, she says.

Everywhere she goes, she carries them within her. No matter how far away she is from home, she knows that „I will feel at home again almost as instantly as I set my sights on Brazil’s untamed natural beauty which to many may seem soo ordinary even though it isn’t as plain as it presents itself to be“, she says.

Like her people, the Brazilian folk, she too is constantly striving to be an even more positive kind of person.

„That I think, is an inherently Brazilian quality which others, unfortunately, fail to recognize as a vital part of the profile of the Brazilian folk“. She believes, that „not taking this aspect into consideration somehow devalues the Brazilian within me.“

As our conversation comes to a close, she urges current and future generations to be loyal to themselves first and then to those who have shown themselves as worthy of loyalty as they continue to search for knowledge and alternative ways of existing within humanity. Communicating this to the current generation, she hopes to inspire them to cherish those „little moments of hope, the little bites of scintillating provocations, may we always keep them in us.”